I had the pleasure recently of a portrait shoot with Scottish-footballing legend Rose Reilly.

Visiting Rose down in her Stewarton home, near Glasgow, to photograph for the The Times, I was regaled with stories of Rose’s incredible footballing career in the 1970’s and 1980’s when she reached the top level of women’s football, playing not only for Scotland but also for Italy, and for clubs such as ACF Milan, and ACF Catania in Sicily.

With those clubs she was a pioneer for Scottish women’s football. Rose twice won the Serie A Golden Boot, in seasons 1978 and 1981, and won eight Serie A titles, a French title and four Italian Cups. In 1984 she played for the Italian women’s team winning the then unofficial women’s world cup.

One of the greatest pleasures of shooting portraits, being an editorial and press photographer, is the chance to meet people, to hear their stories, to spend a little time with them. I have to admit Rose wasn’t someone I’d heard of previously, but what a great shoot it was, doing the photos, having a coffee, talking, listening to her stories. Little jobs like that are the pleasures of working in this industry. 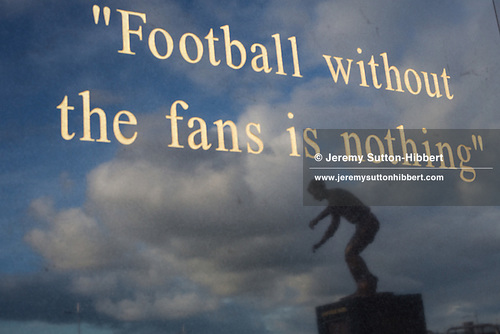 Rome may be the Eternal City, but here in Glasgow, Scotland we have a City of Eternal Rivals. A city of football and the rivalry between the ‘Old Firm’ teams of Celtic FC and Rangers FC. Green against blue. And some may say Catholic against Protestant.

As a reportage photographer in Glasgow, one thing is sure, you’re never short of football culture to photograph, life unfolds on the street, life and death in 90 minutes plus stoppage time, and then after the final whistle, the fans depart the stadiums scurrying off to cars, bars and public transport. A sea of blue or green heading in every direction, like a battlefield of old.

Last year I spent a season following Rangers FC through the 3rd division, and then this year I’ve recently shot a feature on Celtic and Rangers’ rivalry for a European magazine, a few spreads of which are here. A nice layout and design I thought, a nice edit, but sadly didn’t use my favourite image which is the one above these words.

I’m pleased to say that some of my work will be appearing in a Street Level Photoworks and Harbour Arts Centre group photography show called ‘Going The Distance’.

The description and theme of the show is “Sport, like art, is a universal language, it is part of our everyday lives, and a feature of our society’s diverse cultural life, involving people of all abilities and backgrounds. This exhibition, which takes place in two venues across North Ayrshire coincides with the Commonwealth Games in Scotland and celebrates the exceptional and the commonplace in sport”.

7 July – 28 September at the Harbour Arts Centre, Irvine, Scotland, with a reception to be held on Saturday 12th July.

The image below is one of mine from my ‘Life In The 3rd’ series, entitled ‘Rule Britannia’, and is one of my images which will be on show. Hope you can make it along to one of the venues, many thanks.

I had a photography portrait assignment last week for an editorial client, through in Edinburgh, Scotland. I was given the barest of details of the background to the story and why I was going to be photographing this guy, but I was given the contact details, set it up and went through.

All I knew was that the person I was to photograph, James Bannon, had been an undercover policeman and he had a show on at the Edinburgh Festival. But hey, I’m a working professional, 23 years of editorial photography experience, I can operate on the briefest of briefs and fill in the blanks as I go, and not let my client down.

So I get there early, after James Bannon had pointed out on the phone that he hated being late for people, as do I. And I hate people being late for me, time is precious, and it is disrespectful to be late I feel. I like to arrive on jobs early, park the car, check out the area for possible photography locations and backdrops, and if there is time, get a coffee, think the job over, collect myself and not have to rush in all a fluster.

So I’m there early, reading a review hanging on the railings, of James’s  festival show. James Bannon, undercover policeman at age of 21, infiltrates the Millwall Football Club fans known as The Firm. Yes, those Millwall FC fans, the football hooligan ones which are infamous in popular football culture. So let me get this right, at age of 21 a policeman infiltrates them and ‘runs with them’ for two years whilst informing on them. Jeez. And then just as I’m reading the review, this voice speaks in my ear “allwright fella?”. I turn round to face the soft voice. It’s James. But it could be James Morrison of The Doors. Beside me was James Bannon, and his beard and hair, looking nothing like the clean shaven, head shaven face on his festival poster…I later find out that that was just a model, posed up for the book cover.

So the portrait shoot takes place, we use a few locations behind the theatre where James had his show running. We get on fine, the pictures go fine. I have James looking out from behind doors, and inside from outdoors, trying to give that ‘man on the inside looking outside undercover cop’ kind of vibe. Hey, you do what you can, right?

James was a gent, answered my questions, posed up no questions, happy to do what was required. And then, at the end, as we’re getting ready to go our separate ways, he reaches into his bag “I’ve got a book for you”, and duly signs his new book, ‘Running With The Firm‘, which had only been out two days, and hands it to me as a gift. I know I’ve been in this game for 23years and counting, but I was honestly moved and touched by the way he did it, there was no need. I was there to shoot an assignment, no gift needed.

So over the next couple of days I read the book, a good enjoyable gripping read, not without some page turning moments, such as when James gets accused by the Millwall fans of being “the old Bill”. Scary stuff. But what struck me whilst reading it was the similarities between being an undercover policeman and being a photographer. The need to be a chameleon. The need to meet people and get them to trust you, to assimilate into their world and to not stand out. Working on reportage stories photographers need to be accepted, even on short editorial assignments we need to be accepted to get the pictures we want or our client needs. So we become a chameleon, we mirror those around us  in order to be accepted, to create the access we photographers need for images. Just as James dressed like a football hooligan, I also need to tailor my dress to the relevant situation, be it a suit in boardrooms or jeans on the street. The way you talk, the subjects you talk about, the swearing or lack of it, all helps you blend with your photography subjects and be accepted. And in other situations, you buy them beers, you laugh at their jokes, you do what you can to forge a relationship in the short time your assignment or project allows. Slight difference is that I wasn’t then informing on the people and they’d perhaps be arrested, and this is what lays on James’s mind during his time undercover, he became pals with the people, grew fond of them, informed on them and ultimately they…well, you’ll just have to read the book, won’t you.

My image (above) of a Rangers FC fan, is this week’s ‘Why I Took This Image’ over on the Document Scotland photography collective website. The article explains a little of the background to the image, how it came about and why I took it.

The ‘Why I Took This Image’ series is a weekly article in which the various photographers exhibiting as part of the Document Scotland-curated ‘Seeing Ourselves’ photography show discuss their work. ‘Seeing Ourselves’ can be seen at Fotospace Gallery, Rothes Halls, Glenrothes, until July31st 2013.