At the end of last week I had a nice photographic portrait assignment for a French editorial client, it came in via a phone call. Always great to receive calls from picture desks in France, the female picture editor’s accented English sounding exotic down the phone line.  And then the photography job details, could I go and photograph Nile Rodgers, the multi-hit musician and music producer, a man who has worked with everyone from Madonna to Daft Punk, via Bob Dylan. Mais oui! Bien sur I could go and photograph him.

The portrait session was arranged for two days later, and I would have an hour and  half with Nile Rodgers, plenty of time to take a portrait and shoot some reportage as per the photography brief.

So of I trekked to Edinburgh, nice little afternoon jaunt from Glasgow, and over to Summerhall Gallery, the old veterinary school, where Nile Rodgers was going to be performing for 2 nights. I had a scout around, saw the room where the shoot was arranged for, it was actually the room where the performance would take place. It was dark. Very dark. So I scouted out some other locations outside and inside, trying to find options, wanting as many locations and variety as possible, to give the picture editor in gay Paris as many choices as possible. I had a main large area to fill in the paper and I didn’t want to waste the chance, or let down the picture editor whom I’d worked for before. 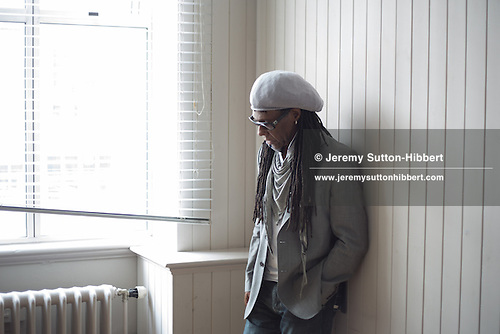 And then, bam, a big 4 wheel drive swept into the courtyard of Summerhall, and out stepped Nile with his black bag, and looking dapper in all grey and white. Up onto a fire exit stairwell we went, and first things first, Nile wanted me to shoot portraits of him on his camera, before I’d even lifted my own. We chat music, we chat musical influences as you travel, we chat writing, work ethic, all the whilst Im photographing, mind going 90mph, keeping the chat going, keeping one eye against the camera and looking through the 50mm. And then inside, for a few portraits in a small quiet room, and he tells me he hates being photographed. Cue time to wrap it up I thought, and move into the rehearsal area.

The rehearsal room was dark, but there were things going on. Lights, stage props, artist Jean-Pierre Muller giving directions, and a Belgian good looking girl helping out in between changing her clothes 3 times and drying her bra on a radiator. Nile was photographing away, then directing a stagehand in how to use the camera to photograph himself, portraits for himself on his own camera (reminiscent of when I worked with Karl Lagerfeld in Tokyo), and then up onto the stage, a guitar appears, and Nile starts playing, and all the while I’m floating around, being ignored, shooting my own little reportage… 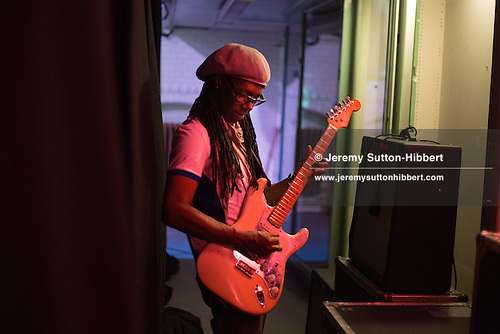