We are very pleased to announce that Jeremy’s work is being represented in the inaugural Flow PhotoFestival. This new photography festival takes place across the Highlands of Scotland throughout September.

“High Life Highland are delighted to be hosting a striking exhibition of black and white images shot aboard the seine net fishing boats, Mairead and Argosy, in the North Sea in the 1990’s. These images, by Scottish documentary photographer Jeremy Sutton-Hibbert, capture the reality of the life at sea for the fishermen of Scotland’s North East fishing communities – the cramped conditions, the monotony, and the gruelling work in harsh conditions.”

We’re delighted to write that Jeremy Sutton-Hibbert currently has two bodies of work exhibiting with Shetland Arts. North Sea Fishing is showing until August 27th at the Bonhoga Gallery, and Klondykers is showing at the Mareel arts centre for the next year, both in the Shetland Isles.

About the North Sea Fishing exhibtion, Shetland Arts wrote: “Scottish documentary photographer Jeremy Sutton-Hibbert captured the reality of the life at sea for the fishermen of Scotland’s North East fishing communities aboard the seine net fishing boats, Mairead and Argosy, in the North Sea in the 1990s.

These images serve as an important record of a period and style of fishing which is already passing into history, an insight into the working conditions for seine net fishermen, operating far from the safety and comforts of the shore. They capture the cramped conditions, monotony, and the grueling work in harsh conditions.

The North Sea – “a confused sea” as it was once described to me and, as one fishing trawler skipper told me, late at night, only the instrument panel lighting the bridge room, “the north sea, she’s a cruel mistress”.

The Klondykers work (2 images above), shot in 1994, and published as a zine by Cafe Royal Books, looks at the period in Shetland’s history when fish processing ships from the Eastern Bloc countries would come to Shetland waters buying up catches of mackerel and herring from Scottish fisheries. The Klondykers work was written about by Shetland News here on the publication of the Cafe Royal Books. Very limited numbers of the Klondykers book will be on sale fro Shetland Arts during the run of the exhibition.

Speaking to the Shetland News, Jeremy says of his time photographing in Shetland “It was the period when communism had collapsed and Eastern Europe was opening up. To come to Shetland to see street signs in Cyrillic and people in all these foreign accents walking around – it was a fascinating time.

I remember driving out to the garbage dump. A couple of ships had been impounded in the port and hadn’t been allowed back to sea, and the company weren’t paying the crews any wages.

And I remember Shetlanders driving up and giving them packets of cigarettes, or bags of clothes and things. It was interesting to see that Shetlanders were rallying around to help them.”

Klondykers, for the next year, at Mareel, North Ness,, Lerwick, Shetland ZE1 0WQ.

The North Sea Fishing exhibition, on completion of its run in Shetland, will travel onwards to:

I’m pleased to announce that 4 photographs of mine will be on display in the Consul’Art, in Marseille, France, in the coming weeks, as part of the Street Level Photoworks exhibition ‘A Window On Glasgow’.

This exhibition profiles aspects of Glasgow in 26 photographs covering styles of social documentary and portraiture to street and architectural photography, by several photographers who are associated with Street Level as artists and co-creators. The work portrays a unique profile of a city in constant transition – from the mid 70s, when half the city’s tenements were being demolished and the other half undergoing transformation and construction, to more recent depictions of people and place which convey the energy of change in the environment and in the diversity and demographics of its inhabitants. From a city recovering from the post-war deindustrialisation and depopulation, to one that has cohered around  community spirit, civic pride and a cultural resurgence in its art, music, theatre and writing, the exhibition aims to capture aspects of the social, cultural and political identify of Scotland’s largest city.

This exhibition is part of the celebrations to mark 10 years of Friendship and Twinning between Glasgow and Marseille, supported by Glasgow City Council and the City of Marseille.

Books of both series, Nelson Mandela in Glasgow, and Shipbuilding On The River Clyde, are both available to buy via Street Level Photoworks, Glasgow.

Here’s a couple of tear sheets from recent work…

First up, nice usage of some photography I shot on assignment for Greenpeace in Iitate, near Fukushima, in Japan, covering the nuclear radiation decontamination efforts there. It’s a shocking state of affairs there, the Fukushima nuclear disaster is far from finished and it is estimated the clean up will take at least another 40 years…but of course Prime Minister Shinzo Abe and his government wish to present a clean, decontaminated face to the world as the 2020 Olympics looms.

Here’s the cover and a spread from the recent Greenpeace report which used the images, and which makes for sobering reading.

Image above shows a Japanese worker ‘decontaminating’ the forest, one stone at a time…the moss will grow back in weeks, and be contaminated due to the radiation held within the soil. A couple more spreads below from within the report…

Another tear sheet just popped in to the studio is the below, a series of images shot for Historic Scotland magazine documenting a day in the life of one of their Rangers, and a journalist trying out the job for the day.  It was a fascinating reportage and portrait shoot, on Edinburgh’s Holyrood Park and Arthur’s Seat, granting me a fascinating insight in the park life, its history and the archaeology of the area.

The job required it was shot in mid-Winter, but the brief required the images to look like Spring as that is when the article would run in the magazine. The day of the shoot was a cold, dark, grey, winter day. Nothing like spring. But then the clouds parted and for 10 minutes there was blue sky and sunshine. I shot like crazy. Hey presto, spring time.

Alas, I was disappointed by the usage of the images, by the spread. The design wasn’t to my liking so much, but the client was happy and that ultimately is the aim.

All photographers have lists – lists of places they wish to travel and photograph, festivals or events they’d like to witness and photograph, places in their home town they want to record or document, or if you shoot portraits, a list of people you’d like to photograph.

For some time now Sir Paul Smith, of of Britain’s most well known and well respected fashion designers has been on my ‘Portrait wish list’. And yesterday I managed to shoot a few portraits of him, not in ideal circumstances, and not quite as I’d have liked, but sometimes you take your opportunity, and some opportunities are better than no opportunity. 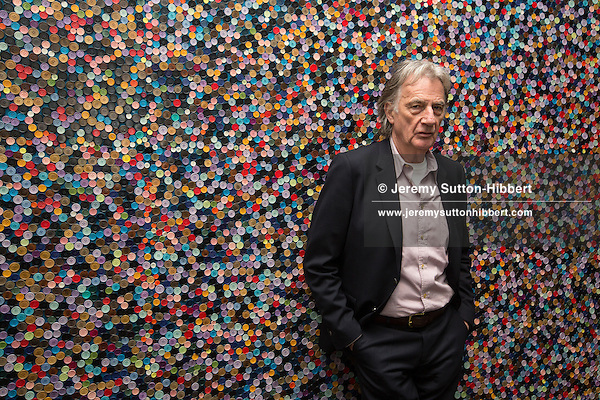 Sir Paul was in Glasgow, Scotland, to open his new exhibition ‘Hello, My Name Is Paul Smith’ at The Lighthouse design centre. There was to be a press viewing and photo opportunity, and I availed myself of that opportunity. Alas it was a busy occasion, and the possibility of a one-to-one portrait session, with time, was not available.

But I do what I do. I’d adept at making the most of these situations. I work fast, I work around the obstacles, step past hurdles and still deliver, still bring back an image of use. Just like on many assignments, life throws hurdles at you, rugs are pulled from under your feet, but I keep calm, keep shooting, work around things and ultimately deliver. That, sometimes, is what clients are paying you for.