Up early in Glasgow, Scotland, today (life as a freelance editorial photographer demands it), and I see The Guardian has run a little slideshow of images from one of my last assignments in Japan, a trip to Fukushima region with Justin McCurry to report on how people are coping with life in these post-Fukushima disaster days (although it’s hardly post-Fukushima as the radiation fallout remains…).

Justin and I visited independent sake brewer Chieko Sasaki, an elderly woman who was evacuated from Iitate village due to radiation fears. She is now rebuilding her independent home brewed sake business in the town to which she has had to move. But she can no longer use the rice from her old town due to radiation contamination, she now has to source rice from elsewhere.

We also spent a very early morning with the fishermen from Soma, north of where the Fukushima Daiichi nuclear plant is. We watched, interviewed and photographed as five boats landed their catch of octopus (monsterous, disgusting looking ones) and large whelks. All 5 tonnes or so were landed, and then get radiation checks before going on sale locally and as of last week even on sale in Tokyo fish market. The Guardian has put together a slideshow of these images, and from the other stories, in a Life After Fukushima photographs slideshow. You can see a larger set of these Fukushima octopus fisherman and radiation testing photographs here. 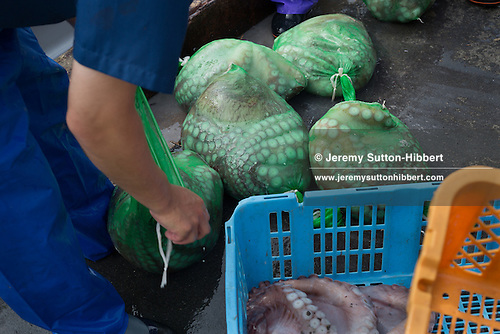 Japanese fisherman land their catch of octopus, and large whelks, at the fishing port which has barely recovered from the March 2011 tsunami, in the Matsukawaura district of Soma, Japan. ©Jeremy Sutton-Hibbert 2012, all rights reserved.

And the final story of Justin and I’s trip was to Tsuchiyu Onsen town to report on their plans to use their naturally occurring hot waters to power a geothermal energy plant to supply the town with it’s electricity needs, thus making them less dependent on nuclear power.

So those were my last assignments in Japan for The Guardian, now here in Scotland there is plenty of work to be done as a freelance portrait and editorial photographer, there’s plenty to be photographed and reported on, plenty to see. The day beckons.